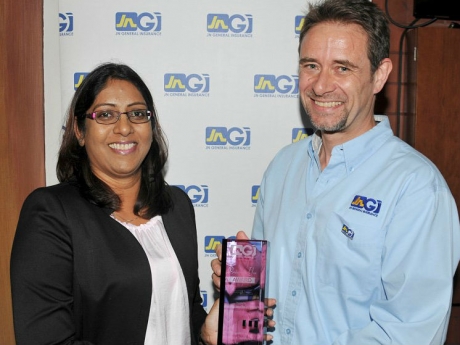 The longest established general insurer in Jamaica, JNGI has changed its business model to identify and focus on its core broker partners, Hind said.

He maintained that a key element of this change was the recognition of those brokers who contributed most to the company’s performance in the previous financial year, JNGI said in a release.

“Our top brokers are those who share the most with us,” Hind told a team from Allied Insurance Brokers Ltd.

They were recently at the JNGI’s office on King Street, downtown Kingston to receive their award as the organisation’s top broker.

“We operate in a challenging business environment,” Allied Insurance General Manager, Amanda Beepat, told Hind. She pointed out that this was eased with JNGI as “we push for what the client wants and you were responsive to us.”

Saundra Bailey, General Manager, CGM Gallagher Insurance Brokers said that “with the partnership which has been embraced over the last few years, it makes a big difference having a person inside JNGI who we can call on, and that initiative has helped to build our relationship.”

JN General Insurance has benefited from its evolving relationships with its broker partners, Hind said. “We chose to focus our business through direct channels and intermediaries who share our operational and underwriting philosophies.”