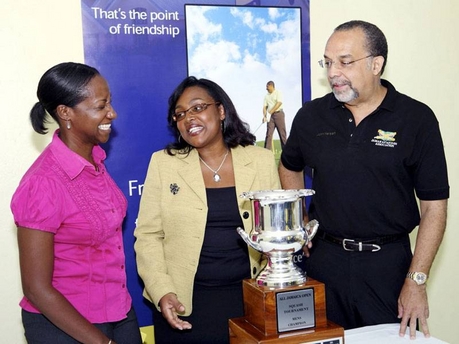 Allied Insurance Brokers has thrown its support behind this year’s staging of the All Jamaica Junior and Senior Squash Championships.

Yesterday, a cheque for $300,000 was handed over to officials of the Jamaica Squash Association to offset the cost of staging the championships. The presentation was made at the Liguanea Club in New Kingston.

The junior competition is set to begin tomorrow and the association is anticipating highly competitive play at this year’s tournament, particularly at the junior level where several young players are at the top of their game.

Serious competition is expected in the boys’ Under-17 category where defending champion Julian Morrison is expected to get a solid challenge from Ashante Smith, who is highly favoured to win the title, David Mullings and Josh Mahfood.

In the boys’ Under-15 category, all eyes will be on reigning champion Jake Mahfood who looks set to take the title again this year. And fireworks are expected in the Under-13 age group where Jonathan Walker, Stephan Morrison and Fraser McConnell are all in contention for the trophy.

The juniors will be competing for spots on Jamaica’s team to this year’s Caribbean Championships.The senior competition will be at the same venue from July 18-23 where Wayne Burrowes is set to defend his men’s singles title.

“We have been watching the progress of squash in Jamaica quite closely and we are impressed with how our Jamaican players are doing locally and regionally and we are proud to come on board as the title sponsors of the country’s largest tournament,” said Grace Burnett, managing director of Allied Insurance Brokers.

“We think squash is an exciting game with huge potential and we are proud to lend our support to help our local players, who are showing a lot of promise, to break through to the next level in the Caribbean and internationally,” Burnett added.

Karen Anderson, organiser of the tournament, said she is expecting a very exciting championship.

“This year’s junior championships is going to be a hotbed of competition particularly on the boys’ side, where we have several young players in top form,” said Anderson.

“The Jamaica Squash Association is thrilled that a company like Allied Insurance Brokers has seen the enormous potential in local squash and with their tangible support, we expect that this year’s All Jamaica Championships will be an exceptional tournament,” Anderson added.