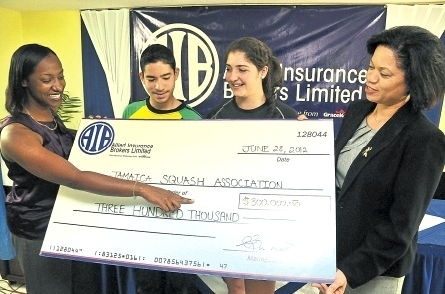 ALLIED Insurance Brokers has once again thrown its weight behind local squash by contributing, for the second year in a row, $300,000 for the All-Jamaica Junior and Senior Championships.
The tournament actually started yesterday and ends on Sunday, while the seniors will bow into action on Monday, July 9 to the 14th. Both events will be held at Liguanea Club, New Kingston.
Andrea McLennon, Allied Insurance’s assistant general manager of business development, said his organisation was once again proud to be title sponsor of the country’s largest squash tournament.

Said McLennon: “As you know, our local squash players have been performing commendably in both local and regional tournaments and we hope that we can continue to help them to develop their talents.”
McLennon was specifically refering to the promising Chris Binnie’s historic triumph in becoming the first Jamaican to win a professional title — in the British Virgin Islands last weekend.
“As some of you may know, Allied Insurance Brokers is a subsidiary of GraceKennedy, whose rich tradition of sports sponsorships are well known. We’re proud to continue that tradition, demonstrating that at GraceKennedy, we choose to care,” she said.
She added: “Today’s sponsorship signals our strong commitment to sports. We believe squash and sports in general aids our young people to understand the true spirit of competition, which will mould them into better individuals who will play their part in developing Jamaica for the next 50 years,” said McLennon.
Meanwhile, all eyes will be on Senior National and Caribbean champion Binnie, who will be in action on local soil for the first time this year.
Karen Anderson, tournament director, said some intriguing battles will be in store for fans in what should be an exciting event.
“Of all the tournaments on the local squash calendar, the Allied Insurance Brokers All Jamaica Junior and Senior Championships is definitely the most eagerly anticipated,” said Anderson.
For instance, in the Girls Under-13 category, Mia Mahfood and Tayla Ziade are inseparable and this tournament will be used as a tie-breaker to determine the No 1 player.
“We anticipate that the Junior tournament is going to be highly competitive this year as the players have been on a rigorous schedule since February, playing a major tournament each month in preparation for the Caribbean Area Squash Association’s Junior Championship which will be held in Jamaica from July 20-26,” Anderson said.
“The Jamaica Squash Association is particularly pleased that Allied Insurance Brokers has come on board for the second consecutive year,” she reiterated.
“We thank the team at Allied for providing financial support to run the tournament and throwing the weight of their brand behind squash.
“Jamaica’s squash has tremendous potential but with tangible support from corporate Jamaica, its full potential will not be realised,” she added.